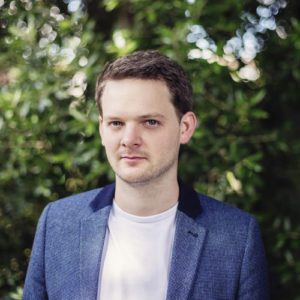 Liverpool-born musician Matthew Hardy graduated from the orchestral conducting masters programme at the Royal College of Music in 2018, where he studied with Peter Stark, Howard Williams, and Martyn Brabbins. He was also a conducting scholar at the 2017 Dartington International Summer School, studying with Sian Edwards, and the BBC National Orchestra of Wales Cardiff Conducting Days course in 2018.

During his time at the RCM he assisted conductors Bernard Haitink, Vladimir Ashkenazy, Martyn Brabbins, and Jac van Steen. 2018 performances at the RCM included Variations on a Theme of Haydn by Brahms, Dance Suite by Bela Bartok, Debussy’s La Mer, and smaller works such as Tristan Murail’s Winter Fragments, Octandre by Edgard Varèse, Ragtime by Igor Stravinsky, and These Broken Wings by David Lang. He also gave the premieres of Sungji Hong’s alto flute concerto, Transfigurations, with flute soloist Carla Rees, and Edward Nesbit’s Songs for a Dying World with mezzo soprano Rachel Maby.

He is the Artistic Director of East London Music Group, which he co-founded in 2015. With ELMG he has given performances of Stravinsky’s The Soldier’s Tale and Walton’s Façade, as well as commissioning and premiering new works from Edward Nesbit – Strange Joy, and Robin Haigh – 1936: An East London Uprising which tells the story of the Battle of Cable Street in music and narration. The group has focused particularly on the equal pairing of music and acting and is committed to the development of new works. ELMG is also active in community and educational work and has led several large scale projects with primary school children in Tower Hamlets and Waltham Forest, exploring local history and contemporary issues. Matthew has been heavily involved in community music making and is Musical Director of the St Albans Rehearsal Orchestra, Bowes Park Community Choir, Pinsent Masons London Choir, and East London Community Band.

He recently appeared on BBC Radio 3 discussing the piece Barricades by Lee Westwood, which was commissioned by Making Music’s Adopt a Composer scheme and premiered by East London Community Band in 2016.

Prior to taking his place at the RCM Matthew worked as a trumpet player and studied with renowned Danish pedagogue Kristian Steenstrup. He is a committed educator and maintains a number of brass and conducting students.